Ed King, ( Lynyrd Skynyrd/Strawberry Alarm Clock) – September 14, 1949 – August 22, 2018 was born in Glendale California and a guitar prodigy from early on in his life. Not even 18 years old, he became a founding member of the Los Angeles band Strawberry Alarm Clock, remembered for their 1967 #1 single “Incense and Peppermints.”

King met members of the future Lynyrd Skynyrd when they were opening for Strawberry Alarm Clock in early 1968. When Strawberry Alarm Clock disbanded, he became an official member of Lynyrd Skynyrd in 1972, replacing Leon Wilkeson on bass when Leon had left the band briefly. When Wilkeson rejoined the band King switched to lead guitar turning Skynyrd into the “guitar army” band, famous for its guitar fireworks.

He helped write “Sweet Home Alabama” in 1974; the song became one of Skynyrd’s strongest hits and a staple of rock guitarists everywhere. It is King’s voice heard counting off 1-2-3 at the beginning of “Sweet Home Alabama.” Other songs that King wrote or co-wrote include “Poison Whiskey”, “Saturday Night Special”, “Whiskey Rock-a-Roller” and “Workin’ For MCA”. He appeared on the band’s first three albums, Pronounced Leh-Nerd Skin-Nerd, Second Helping, and Nuthin’ Fancy.

Ed King quit Lynyrd Skynyrd pretty much at the peak of their fame, mainly because he finally got fed up with Ronnie Van Zant’s mercurial ways.

Skynyrd had three guitarists — at that point, King and founding members Gary Rossington and Allen Collins — but King was an outsider from the start. All of the other band members had grown up in the same part of Jacksonville, Florida, while King wasn’t even a Southerner, but a native of Glendale, California. He was marvelously talented — that riff in “Sweet Home Alabama”? That was King’s creation — and he was valued for his abilities as both a musician and a songwriter, but he was never really “one of the gang”.

Of writing the song with bandmate Ronnie Van Zant, King claimed, “we wrote that song in half an hour, but it took us about a half a day to put it together. The song came real quick. I started off with that riff and Ronnie was sitting on the edge of the couch, making this signal to me to just keep rolling it over and over.”

In an interview shortly before his death from cancer in 2018, King pointed to the below photo as being illustrative of his place in the band — all by himself to the left, with the other guys all standing side by side: 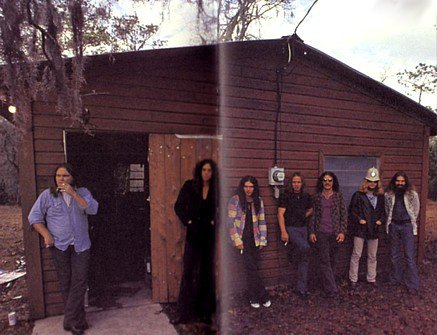 In March of 1975, during a show in Ann Arbor, Michigan, King snapped two guitar strings while playing “Free Bird”, throwing off his performance. According to King, his guitar tech had not been around to change his strings because he had been thrown in jail, along with Van Zant, following an altercation with police.

Ronnie didn’t care why King’s strings broke; all he knew was that Ed had fucked up. He unleashed a torrent of verbal abuse on King, including such colorful pronouncements as “you don’t amount to a pimple on Allen’s ass”.

Following the incident, King said he returned to his hotel room, thinking “what the hell am I doing here?”, packed his belongings, and left without a word, leaving his bandmates to wake up the next morning to find out he was gone (and Rossington and Collins to scramble to rearrange the songs to make up for King’s absence).

About the decision to leave the band, King said “well, I was out of my mind for quitting. But it was the best thing I ever did. It just got a little too nutty for me. So, in the middle of the night, I just walked out. It had been a bad night the night before. I had gotten fed up with frankly all the violence. I had good reason to leave.”

King was ultimately replaced by Steve Gaines in 1976; Gaines would die in the 1977 plane crash that also killed his sister Cassie and Van Zant. King said he visited the cemetery after the crash to pay his respects, and it was then that he discovered that he and Steve had been born on exactly the same day: September 14, 1949. He felt he had dodged a huge bullet by quitting when he did.

King would later reconcile with the other band members, and rejoined them when they reformed Skynyrd in 1987, but had to leave the band due to to congestive heart failure problems in 1996. He had a heart transplant surgery in 2011. Both he and Gaines were among the band members inducted into the Rock and Roll Hall of Fame in 2006.

He died, presumably from cancer at his Nashville home on August 22, 2018.

Founding member of Lynyrd Skynyrd Gary Rossington released a message on Twitter: ” I’ve just found out about Ed’s passing and I’m shocked and saddened. Ed was our brother, and a great Songwriter and Guitar player. I know he will be reunited with the rest of the boys in Rock & Roll Heaven.”